-- On June 1, China released a master plan for the Hainan free trade port, aiming to build the whole of Hainan Island into a globally influential high-level free trade port by the middle of the century.

-- With supporting policy packages, Hainan is becoming a popular destination for foreign investment and enterprises.

-- So far, the free trade port has landed a total of 94 major projects including 20 foreign-funded ones, covering sectors such as tourism, modern service and high-tech industries.

HAIKOU, Sept. 11 (Xinhua) -- The construction of the Hainan free trade port has picked up steam since Chinese authorities drew up a plan for it three months ago, demonstrating China's commitment to opening up amid the COVID-19 pandemic.

A Harrow International School newly completed in the provincial capital city of Haikou ushered in its maiden term on Monday, following the opening of the school autumn semester across China.

The school, covering a floor area of about 71,356 square meters, accommodates more than 400 teachers, students and staff from 17 foreign countries as well as China's Hong Kong, Macao and Taiwan. 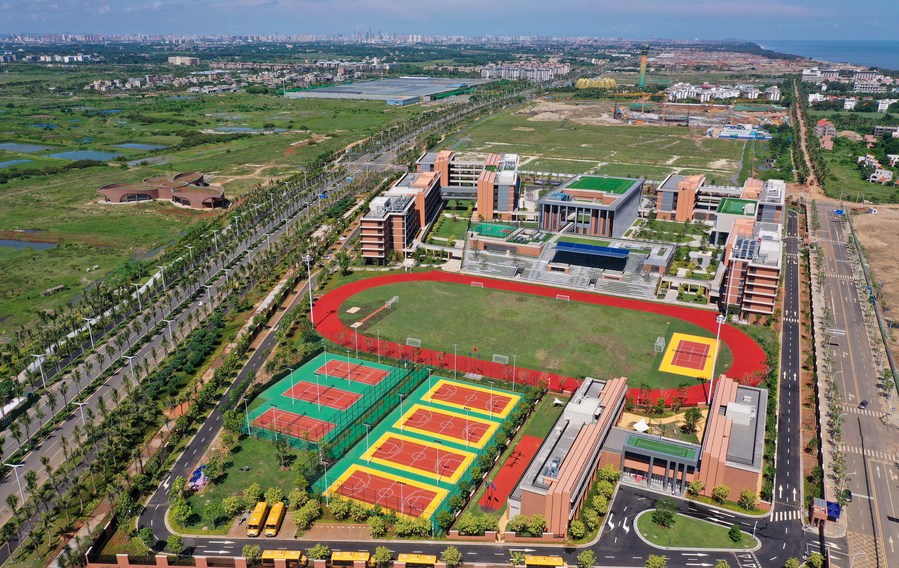 Along with the Harrow School, Hainan is introducing international education resources including Dulwich College and Wycombe Abbey School.

"The international schools will offer diversified education services and thus are greatly important to deepening opening up in this sector. They will also help improve the business environment of the Hainan free trade port," said Zou Wentao, an official with the provincial education department.

On June 1, China released a master plan for the Hainan free trade port, aiming to build the whole of Hainan Island into a globally influential high-level free trade port by the middle of the century.

Opening up the education sector is just one small part of Hainan's efforts toward constructing the free trade port over the past three months or so.

With supporting policy packages, Hainan is becoming a popular destination for foreign investment and enterprises.

So far, the free trade port has landed a total of 94 major projects including 20 foreign-funded ones, covering sectors such as tourism, modern service and high-tech industries.

"The launch of these projects will bring new growth not only to the free trade port but also to global investors," said Han Shengjian, director of the Hainan International Economic Development Bureau. 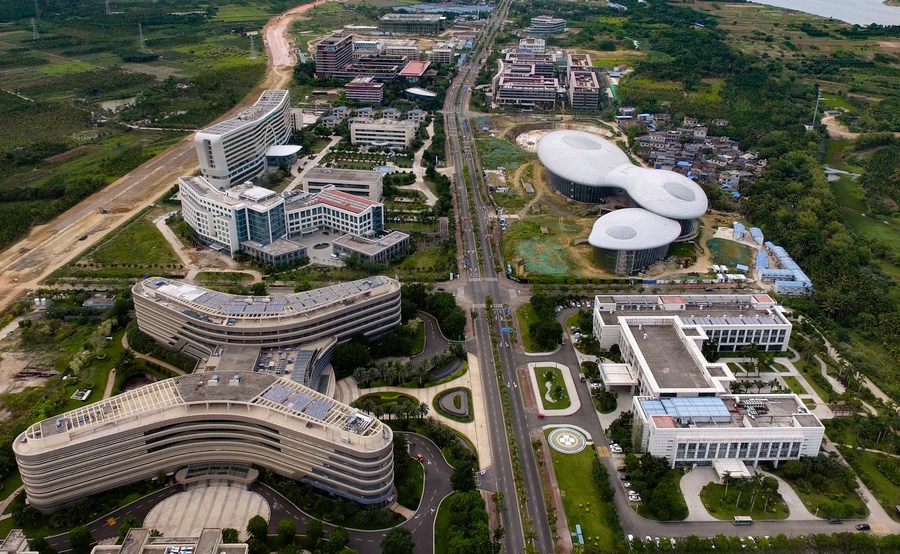 "We look forward to this partnership to think through how to make sure the inventions we create get to the patients that need them. So this is a great place to start that and we look forward to seeing real outcomes in the future," said Joseph Romanelli, president of MSD in China.

Amid uncertainties in the global economy, investors across the world are taking high heed of the Hainan free trade port and looking for opportunities, Han said.

According to the Hainan provincial department of commerce, 136 foreign-funded companies were set up in Hainan in June and July, accounting for more than 47 percent of the total in the first seven months.

"Some time-honored brands from Switzerland, France, Britain and Germany are planning to set up branches or regional headquarters in Hainan," Han added.

On Sept. 3, the last day of a three-day promotional event in a duty-free shop in Hainan's resort city of Sanya, Chu Yadong scurried back and forth in the shop, picking out skincare products and makeup for his relatives. 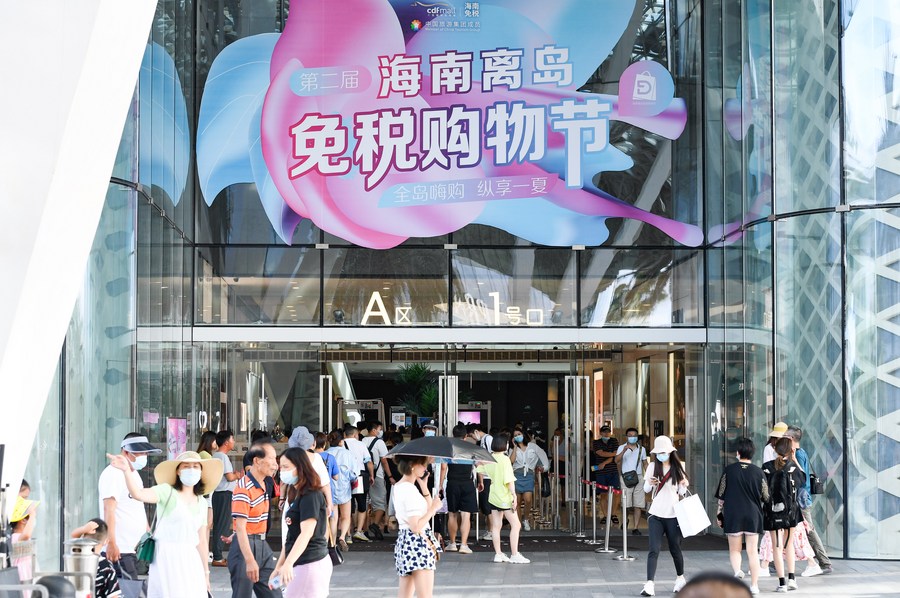 Perfumes, makeup, luxurious watches and handbags, Chu had a long list to buy. "Hearing that I am about to return to my hometown in Sichuan Province, almost all my female relatives asked me to help them buy duty-free goods," said Chu, who works in Sanya.

From July 1, Hainan has increased its annual tax-free shopping quota from 30,000 yuan (about 4,389 U.S. dollars) to 100,000 yuan per person. The categories of duty-free goods have been expanded from 38 to 45, with electronic products such as mobile phones and laptops added to the duty-free list.

The previous tax-free limit of 8,000 yuan for a single product has been lifted, and the number of categories with a single-purchase quantity limit has been significantly reduced.

Enriched goods, lower prices and a rewarding shopping experience have been attracting an increasing number of tourists and "family buying agents" like Chu, and have greatly stimulated domestic consumption.

According to official data, sales from four offshore duty-free shops in Hainan topped 5 billion yuan from July 1 to Aug. 18, an increase of 250 percent year on year, with an average daily turnover of over 100 million yuan.

"The favorable policies can spur consumption and benefit Chinese citizens as they can save a lot of money," said Gao Xujiang, general manager of Sanya Downtown Duty Free Store Co., Ltd. affiliated to the China Duty Free Group. 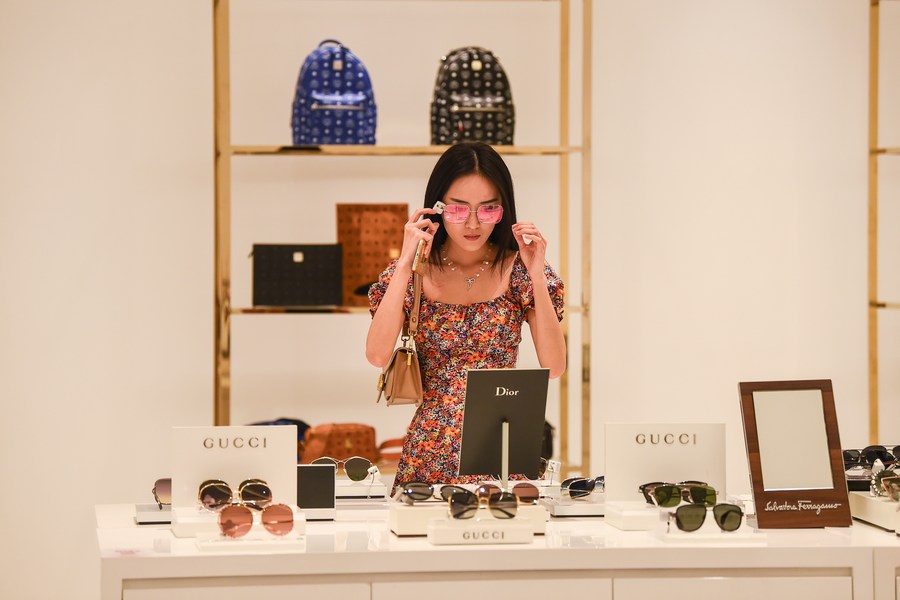 A customer tries out a pair of sunglasses at a new duty-free experience shop opened in a resort in Sanya, south China's Hainan Province, April 15, 2020. (Xinhua/Pu Xiaoxu)

Hainan is expected to build three more duty-free shops in Sanya this year, one at the Sanya Phoenix International Airport and the other two in the downtown area.

It covers 70 anti-cancer drugs from around the globe for 35 common cancers, including 49 that have yet to be approved for sale in the Chinese mainland market. The annual premium for Hainan residents is only 29 yuan per person, while the insurance covers up to 1 million yuan in drug costs.

Yan Lukai, an official with the pilot zone administration, said as an innovation of the free trade port construction, the insurance enables Hainan residents to share the policy dividends.

Hainan is building a people-centered free trade port, which will not only make Hainan people gain a strong sense of happiness, but also share the development opportunities with people across the country as well as enterprises and skilled workers from all over the world, said Liu Cigui, Party secretary of Hainan.